My thoughts on gadgets and Apple

I'm a tech geek, however it doesn't fully apply to gadgets. Maybe it's because i'm a terrible saver and I can't usually afford that many gadgets and I've accepted the fact that I won't always keep up with the new technological developments. And that's one of the reasons why I'm not an iPhone user or Apple fan.
I've been always satisfied with the gadgets I owned and was able to use them to the extent of their capabilities.

Few months ago I started to implement my plan to save some money. Apart from being a terrible saver, I'm also a shopaholic. The plan was to store some amount from each month's salary in a special envelope, in a safe at my workplace. I wouldn't have access to it, unlike a bank account where I tried to put some savings which didn't work out.

The goal was to have enough money for a vacation in summer, somewhere in Italy (of course).

Due to some circumstances and I changed my mind about the purpose of the saving. The geek in me decided to invest the money in some gadgets that were crucially needed :)
Specifically, an Android smartphone and a Kindle. My post about the Kindle will follow next.
And here the story starts. 90% of people I communicate with were asking the same "Why not iPhone, iPad, iEsiminch?"
I'm not an Apple hater, but, obviously, not a fan either. 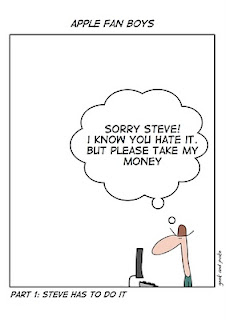 One of the reasons i didn't buy an iPhone, or a MacBook, or never thought of buying an iPad, is that I know it's addictive. The brand. But it's also a matter of convenience. Apple stuff is known to be not very compatible with other brands and it's in a sense - greedy.


My main arguments are depicted in a hilarious comic by The Oatmeal. 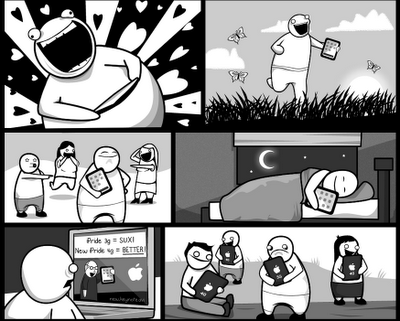 As to my gadgets, I will show them off here, soon :) Besides, I'm planning on organizing a 'gadget presentation' party for all those who have been asking me to show and give opportunity to touch them or tell about their features. Stay tuned :)
Posted at 12:36 AM

Email ThisBlogThis!Share to TwitterShare to FacebookShare to Pinterest
Labels: geeky, IT, thoughts

I have a MacBook, but I agree with you Arpik jan, Apple products are totally overrated. And not to mention the price! What is the price of a Kindle as compared to an iPad? No comparison! (Apologies for just a late comment, but I saw this post just now.)