Goodness from the "Armenian internets": OMG, it's Yerevan tumblr blog. Tumblr-style images of Yerevan with some inscriptions showing the beauty of the city :) Totally LIKE!

Some selection of my favorite pics: 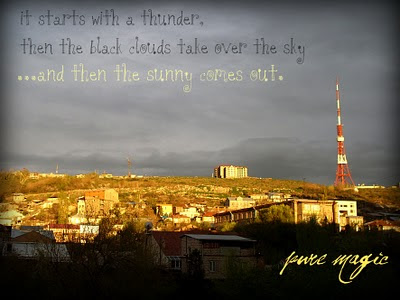 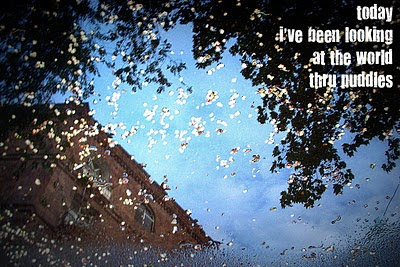 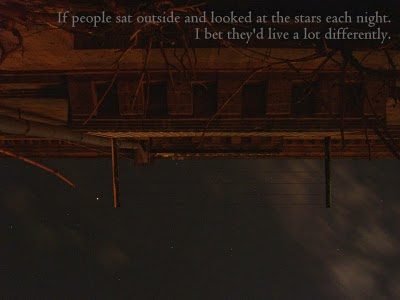 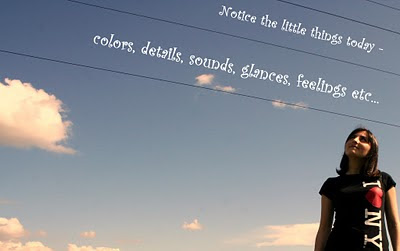 Email ThisBlogThis!Share to TwitterShare to FacebookShare to Pinterest
Labels: me, mood, photo

Every year ARF Dashnaktsutyun is organizing a torchlight procession from Matenadaran to the Armenian Genocide Memorial. They start from burning the Turkish flag and images of some politicians and proceed with a march singing patriotic songs and rising torches. I'm not the party's supporter and i don't generally approve their actions, however the procession was interesting to attend and take photos. It was heavily raining and my feet were all wet so I didn't go till the end. Interestingly, even though there were thousands of people, I managed to meet some friends in the crowd :)

Here are some of my photos:

Here are images from my photo agency. (not to compare :D) Btw, they are now featured in many international news outlets including the NY Times ;) 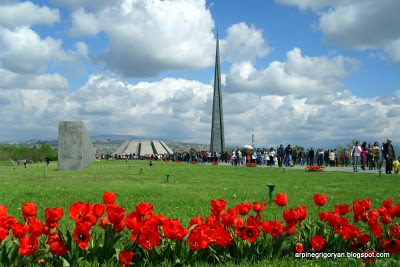 This year I didn't manage to go to Tsitsernakaberd on April 24, as I did last year, but went there today - on 25th, hoping to find the Memorial less crowded. There were still numerous flower merchants on at the "footsteps", but also lots of popcorn, sunflower seed, cotton candy merchants. It is common for children's parks and imho, not so appropriate for targeting the crowd heading to the Genocide Memorial.

It was surprisingly very crowded, many people with kids of all ages, even newborns. No wonder. After yesterday's rainy and cold weather, today it was wonderfully sunny and the clouds were awesome. And it was Sunday too.

On the way I saw conveniently placed trash-bins by FPWC - Sunchild and the newly planted trees. Well done. I was wondering if the flowers at the eternal flame were still there. They actually were, and the pile was getting more dense and higher.
One thing kept frustrating me all the time. For some reason every other visitor wanted to have his picture taken in front of the flowers - smiling, posing. Not only retarded youngsters, but also many adults with kids etc... I wish to see fewer of them next year.
Another thing that was kinda weird - seeing wreaths from various delegations, companies, individuals shaped in corporate styles and colors. An attractive advertising space?

Watch my photo report in the web album and on the slideshow below.

I often daydream about living in New York city, for a little while. I imagine myself walking on the 5th avenue,  checking out fashion boutiques, enjoying the night view on the Brooklyn bridge, jogging in the Central Park on the morning. Many people, including people I know, live in my daydream.
Also, sometimes I'm starting to miss the life i'm currently living. I imagine that it's gone, like in a nightmare, then  i come back to reality and appreciate everything more and more. I love that I live in my home, with my family. I love that I'm born and I am still living in the heart of Yerevan and we have a beautiful balcony where my mother plants some beautiful flowers each spring.
I love that I can go out to walk in the streets by myself and walk home late, because it is safe. I love that I can always meet my friends randomly in cafes and on streets and there are so many memories connected with every corner of my big neighborhood. 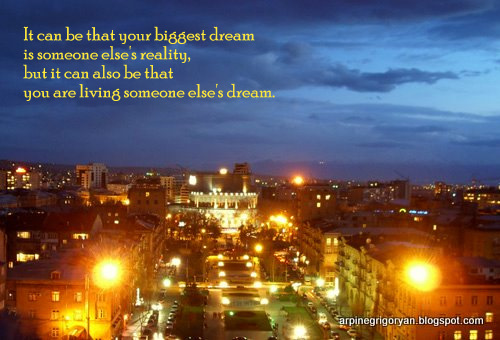 I know that there are people who daydream to live in this beautiful city, have the opportunity to enjoy the magnificent view from the Cascade, meet friends randomly on streets and discover more evidences that this city is so small. Many people dream about living at home and in their historical homeland.

I wish everyone could live where they belong.
Posted at 2:47 AM 5 comments:

Email ThisBlogThis!Share to TwitterShare to FacebookShare to Pinterest
Labels: me, photo, thoughts, yerevan 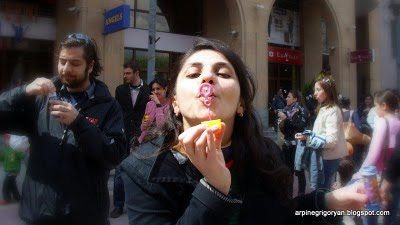 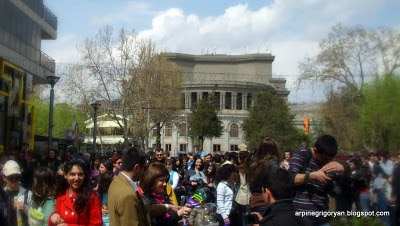 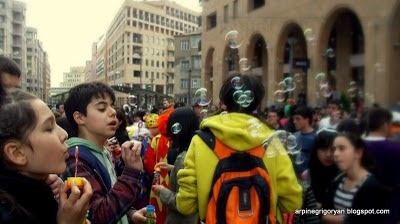 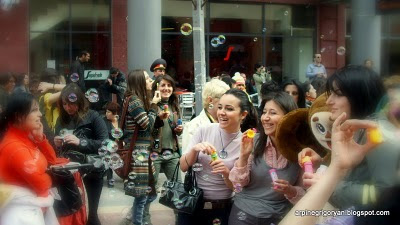 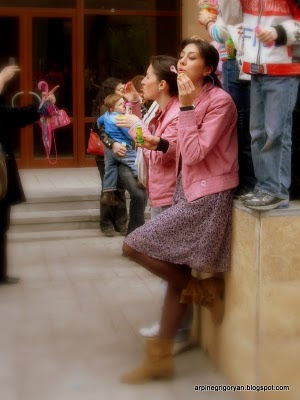 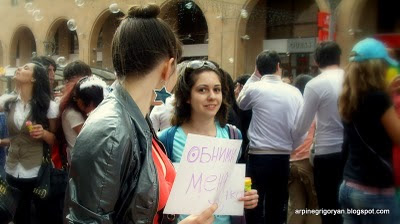 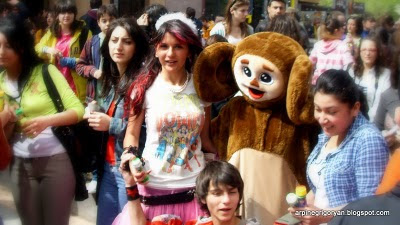 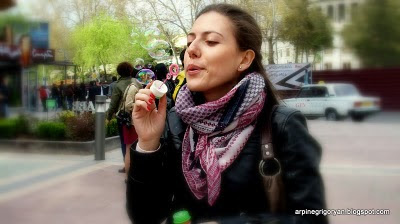 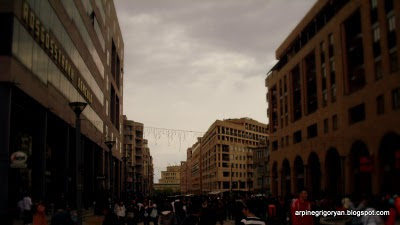 and now i want to cry

because my head is aching badly the whole day
because today i realized again that i don't belong anywhere..i mean truly belong.
my head is filled up with so many useless stuff and i seem not to be able to tell the good from bad
i constantly realize that it's hard to live when pieces of your heart are in so many different places around the world, carried by friends whom you miss incredibly bad.
and because i tend to leave pieces of me with every other person i meet, because i can't help myself with that.
because some people and circumstances are cruel and i don't want to accept them, though i have to.

i want to cry because i just feel like it 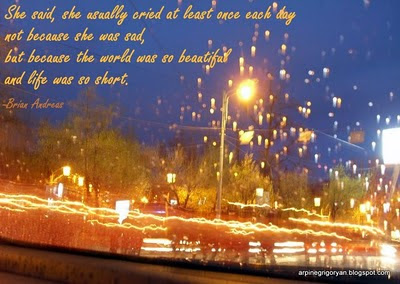 Email ThisBlogThis!Share to TwitterShare to FacebookShare to Pinterest
Labels: me, thoughts

PanARMENIAN Media - an enviable employer and my 2nd home

Continuing the trend, I also want to share how "PanARMENIAN" got into my life. It wasn't ever expected and now seems to me as a pure mystery :) Not going into the details and making the long story short, it goes as follows:

The man whom I didn't know then, but who was later meant to become one of my best friends and the-best-boss-ever© just invited me over for a talk and asked me to work there (I was recommended to him by some people, as a web developer, however). I clearly stated that I won't go for a programming again, but I also told that I'm not sure what I see myself in. He talked and talked for a while; told some things about me that shocked me to death and made very suspicious. How could someone know me so well before we even got the chance to meet personally? I started to guess about his affiliation with some secret services or hours he spent exploring and analyzing the information I have left online by that time. The other guess was that he was somehow coming from future (around this time, probably), when he has worked with me for months and knew me abbastanza bene. This option seems the most likely one to me now :D
Then he didn't mention a position, I couldn't understand why he needed me there so much... There were a lot of small factors that were keeping me from accepting the offer immediately, mostly connected with my habits and expectations of conditions based on my previous workplaces. And I couldn't get our conversation out of my head. It seemed too fancy and unrealistic. I couldn't believe that he really meant what he told me.

Moreover, something I was waiting for so long finally seemed to come true. I was accepted for a 1-year internship where all the expenses, including the travel, were covered. Still can't believe it, but I REFUSED the irresistible offer of my dreams to go to Italy and work in one of sub-companies of the Benetton Group.

I haven't regretted for it ever since.
In reality, this man has an extraordinary ability of seeing people through and attracting like-minded people, getting them together. The growth and continuing success of our company is substantially stipulated by the team that was formed and is being lead by a truly great leader.

Here, in PanARMENIAN Media, I got the chance to try out a completely new profession (or some of them) and for the first time in my life, I developed ownership feelings towards a company I was just an employee of. Ok, not just another employee, but part of the officer's team ;) 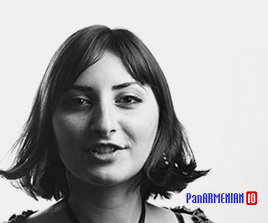 Do you know how it feels when your every waking hour is filled with thoughts connected with work?
When you treat your job as if it was your own business and can beat anybody that would try to make any harm or offend it?
Sense company failures as if they were your personal, or get extremely excited and happy for the achievements as if that were personally yours?
When your job is your hobby and vice versa...
When you have so much fun at work and enjoy your colleagues so much that you don't mind spending your evening hours in the office too :)
When you actually create your work yourself...

I wish you would feel as satisfied with your job, as I am with mine :)

On April 2, 2010, PanARMENIAN.Net turned 10 years old. It was the first online news website in Armenia and it's the best one currently. Believe me :)

For more than a year we've been developing this completely new engine and months of sleepless nights of certain people resulted to this completely new PanARMENIAN.Net that was launched on its 10th anniversary. It's still in beta and will be continuously developed to strive for our mission to become the pan-Armenian common information field. We acknowledge that there are still some flaws and it's not perfect yet ('beta' is a good excuse ;), however we try to make it so.

We work with firm goals, by fair means and are honest to both ourselves and our stakeholders. I would also describe hour working style as detail-oriented and very upright. We don't go for short-term benefits and trade quick results for long-time greater achievements.
It's founded on very professional bases and with a great sense of liability for our country's deserved positive image and civil responsibility. However it's also very cool in terms of being creative and witty, when proper and needed.
Truly amazing individuals form the key staff; people who are multi-talented, completing each other and devoted to the idea. Moreover, PanARMENIAN has got a big army of supporters and friends that we are proud of.

No matter the pageviews, visits, pageranks and other rankings, I reckon that we don't have competitors, but have colleagues together with whom we are working towards developing the media industry in Armenia and presenting the proper image of our country for the world community.

And here's the team that makes it all happen:

You can admire our faces while browsing this and this sections of PanARMENIAN.Net on the right side of the page ;)

Disclaimer: Despite my position in the company and considering the fact that this is my personal blog, opinions expressed here do not necessarily reflect the official position of the company or the editorial.