If I had to choose one musician to resurrect from the dead - it would be Jeff Buckley. For a bunch of reasons. 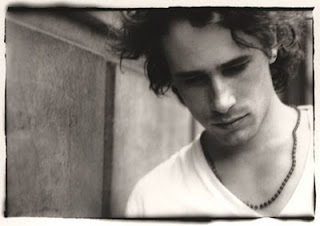 First: his songs make me cry. I don't usually cry on songs.. movies - yes, sometimes, but songs - almost never. Maybe i'm over-emotional today, but I've been feeling these tears trying to break free from my eyes. I somehow feel different when I'm on his songs. Different and better.. maybe they're my drug.

Second: He has written one of my favorite albums ever - "Grace". It's just totally awesome...Every song is special, so relevant and so up-to-date... If you haven't heard about him at all, you need definitely to listen to the whole "Grace"... you'll never guess that it was released 16 years ago... in 1994! The album was included in Rolling Stone's 500 Greatest Albums of All Time in 2003.

Third: Because he sings the "Hallelujah" better than anyone else. His cover of the famous Leonard Cohen's song is included on Rolling Stone's list of "The 500 Greatest Songs of All Time". It brings me chills every time. Especially because i heard it once performed live by some guy, in a small cafe, by a sea side, looking at the waves.

Fourth: He tragically died just too young. TOO young. I never knew about him when he was alive, so handsome and such a promising artist...

I wish i knew him personally. I wish he feels all my gratitude and love I'm sending on his way, wherever he is now.

Dear Jeff, you gave me more to live for, more than you'll ever know...
and just to see what he looked like, how he spoke.. watch this short video:

The video for "Last Goodbye"

tears are voice of heart ... you are sensitive and good human...you can feel the emotions between words. that's why Jeff touched your heart through his lyric ...your originality is your strength... your goodness is your power... keep smiling...