"Guinea Pigs in Technology" or geek girls are cool! my TEDxYerevan talk 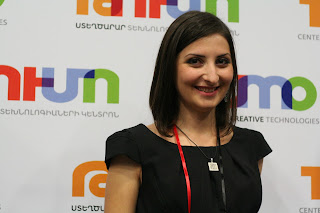 As I have told you already, I was honored to be selected as one of the speakers of TEDxYerevan 2011.

I was very excited about the opportunity and I also knew that it's gonna be a tough job. I had to pass auditions with the organizing team and prepare a talk which would be:

After my sudden success with the BarCamp's talk, everyone expected of me something similar: just an easy, funny speech about geeks and dating. But I really wanted my talk to contain a personal story (like in most of TED talks), have a message and to inspire at least some people. So i had many conversations with various people, met other geek girls. My closest friends were particularly helpful as they were "working" on my talk all the way from the start to the final submission. I even organized some small auditions at in my apartment, asking for feedback on slides, texts and even my body language when talking (a friend even recorded my rehearsal on a video so i could watch myself).

So here I can finally present the result. I'm posting the slide deck, narrative speech (a little extended with some parts that were cut out in the final speech) and also the video of the talk.
"Guinea Pigs in Technology" or geek girls are cool (contains slide notes)

Do you know what guinea pigs and women in technology have in common?

This is an old joke i used to hear a lot some time ago. The popular answer is this: the common thing between women in tech and guinea pig is the fact that women are related to technology the same way guinea pigs are related to pigs. I'm here to tell you that this is complete and utter… nonsense.
Let me tell you a story.

So it’s about a girl, who was born in a very typical Armenian family. Normally her destiny would be pictured like this: she’ll go to school, enter university, find a husband, have some kids, become an exemplary housewife who can cook excellent dolma… and work as a teacher maybe.. well, in this particular family i'm going to tell you about, things went a little different.

Something somewhere went wrong and the first signs of the troubles have started to emerge as the family bought their first PC back in 1996 and their teenage daughter started to show signs of computer addiction.. becoming a «computer rat» in their words. Her initial plans to become a journalist quickly vanished and she started to dream of becoming a hacker.
Since the age of 13 she became the computer expert for her whole extended family, getting emergency calls whenever someone couldn't find a certain key on the keyboard, or couldn't change the font properties in the Word processor.

Since then, “Let Me Google It For You” has been a phrase she used a lot. Well and the RTFM.

She has been studying computer science and one day she realized that the profession she's chosen is changing her while studying databases when she was around 18 years old. She had this idea.. of being able to remember big amounts of information, to be able to connect things she heard.. and just to be able to fit in all the things she was learning. She found out how to optimize her brain's databases, arrange the tables with a 'foreign key' and index all the data, so that all the new information she gets, gets stored in the appropriate table with the keywords, and she can fetch the information quite easily. This was a remarkable moment when she realized that she somehow managed to optimize her brain the way, so she quickly connects the facts and random pieces of information and her memory is significantly improved…

One of the happiest moments of her life was buying a laptop. She needed a portable computer that she could use it even in bed and in cafes, and when she had it, it was not very common to walk in the streets with big laptop bags yet.. and she occasionally felt herself like the little Tiffany from the Men in Black.

With the web 2.0 and new media emerging, she became an early adopter, and was labeled as a tech evangelist. One who signs up for all the new social networks, manages to be aware of all the industry news… she has built some impressive online personality with big network, and with many followers and all…
She was labeled as a geek. Then she started to explore what’s in that word.

So who are geek girls?

These are the most common perceptions I’ve brought together.
Some of these things are truly just myths. In reality geek girls are:

1. Independent or better to say - self-dependent people. They solve most of their own problems :)
They can easily setup a home wireless network, configure a router, even without a prior knowledge in networking. They just know how to find it out digging through search results and technical forums.


3. They are gadget and connectivity dependentEven though they don’t depend on other people for their problems, they are very much dependent on their gadgets and network availability.

4. They learn really quickly and are actually very good at quick self-learning. They know how to google stuff, or youtube things like “how to fix damaged headphones” or simply “how to gift wrap a box”.

5. Geek girls are info-junkie and love sharing. They have to be up-to-date with the latest information on their interest and they all love sharing information and useful hacks. That’s why they are active in social networks.

6. Also, geek girls can be really cute
Just like socialites. Not convincing?

Well.. for the socialites we all know that they are:

I know a geek girl who’s a shopaholic, with a particular passion for shoes. Well, she recently told us, she counted about 27 pairs in her 2011 spring-summer collection.
And not only her… among my geek girlfriends there are ones who think that Lady Gaga is actually cool. They read Cosmo and yeah, Sex and the City is one of their favorite shows of all time, they were noted to be stylish and pretty. Not quite like the perceptions, right?
Now lets go back to the girl I was telling you about in the beginning.

The netbook that’s the default accessory in her purse is actually pink. It has Google, Firefox, Android and Hello Kitty stickers next to each other. Among her 200 RSS subscriptions, there are many fashion, gossip blogs. Her smartphone has more fashion apps than you know existed J She meets her friends not by calling and asking where they are, or telling where she is. They have foursquare and other geolocation services for that. She tracks her not suspecting sister with the google latitude she had setup on her cellphone.

You can meet geek girls in some glamorous party, all dressed up, on towering heels, talking on her smartphone.. Explaining someone from her workplace how to fix the server..
You can meet a girl restarting that damn router at a café when they badly need a wifi.
This is Ani, she has written an alarm clock application for her friend’s phone, because it didn’t have one.

These girls - Nelly and Gayane, have created a very popular website dedicated to indie music all by themselves, coding, promotion and stuff.

Geek girls were active in Yerevan Barcamps’ organization, well; I was one of them and guess what? I was telling about “how to date a geek girl”. Somehow this presentation became a viral hit on the web, becoming the top presentation of the day, then week, then most tweeted and ended up getting about 20K views in couple of weeks. And I got featured in a Taiwanese website with a special mention of my netbook which turned out to be a Taiwanese pride. It got a huge positive feedback and I want to share some of the highlights.

When geek girl is dating a geek guy.. well. That’s predictable. They communicate via messengers (even when they are in the same room), they schedule meetings via google calendar invitations, their computers are sweetly connected via a shared folder in dropbox, and they express their emotions via likes and comments…

When geek girl is dating a non-geek. Either the guy gets paranoic thinking that their (potential) girlfriend can hack everything of theirs, starting with text messages on the phone, ending with email and social media accounts. And nothing good comes out of it.

You can never know that a pretty girl you’ll be flirting with in a bar, might have already checked your FB profile on her smartphone while you were looking away, and might have tweeted how bored she is with your conversations.
But, if guys are smart enough, they start exploring her ‘territory’, signing up in the social networks she’s in, following her posts and reacting to them.
If you follow these simple steps, a geek girl can give you the root password for her heart.

But actually, being a geek girl is really cool.

Being a geek girl makes you feel more confident, independent. You can solve your own problems actually. You become needed and demanded by everyone around, from your boss to your friends.

So what do guinea pigs and girls in technology have in common? Yes, they are both cute J

We, the geek girls of Armenia have decided to establish a community of our own. So i invite the girls to join us.

At last, I want to tell you that a geek’s image for girls actually comes with a ‘dumbness filter’. If you’re a geek girl, you can attract all the right guys and scare all the wrong ones J

The video of my talk

I'm really thankful to all the people who approached me, gave feedback, told me that they could relate to some parts of the talk and just told me they enjoyed it :) I'm thankful to fellow speakers for cheering me up when i was nervous and for all the support. I am so lucky to be part of this great team!

Don't forget to check out other talks on the TEDxYerevan website.
Posted at 2:46 PM