I have already told you how much I love TED and about the TEDxYerevan conferences that I took part in (also as a speaker).

I decided to actively take part in spreading the ideas of TED becoming a TEDx Activator. Now let me tell you what it is and why I'm so proud now :)) 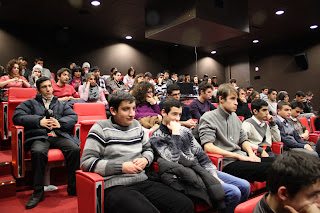 TEDx Activator is an experiment in partnership with the Bill & Melinda Gates Foundation, to support TEDx organizers who are using TEDx events to spread ideas in the developing world and unprivileged communities. Any community that does not have access to TED and TED.com qualifies.

TEDx - is an independently organized TED event by an individual who has to be granted a free license from TED. The event can be just viewing TED talks, or can have live speakers as well. TED rules state that if it's a full-day event, total 25% of talks have to be pre-recorded talks from TED.com.

In reality, TED is very strict about rules for TEDx and I actually enjoy being part of this!!! There is a strong community with many virtual collaboration tools which somehow reminded me of my beloved youth organization - AIESEC.

In the framework of the TEDxActivator program, each of the Activators will be organizing 4 TEDx events in 1 year, for the above mentioned unprivileged communities.

The first event I planned was for teenagers of various backgrounds, the others most likely will be in the regions of Armenia.

The first event me and my friend Gohar organized on November 30, was for TUMO kids exclusively, named TEDxTumanyanPark, and made possible with the help of TEDx Activator Manager and TEDxYerevan licensee Kristine Sargsyan.  It was a viewing event with the theme "Creativity in tech". We invited 100 kids (announcing it on Facebook) to the cinema hall of TUMO.

We selected 5 short to mid-length talks with many visuals. We made sure the Armenian translations of the talks (most of which were done by me and Gohar) were there and were correct. We prepared small intros for the talks and also were telling the main points of the talks in Armenian, since some of the kids couldn't manage to read the subtitles or understand the English speech. We had a great support from the TUMO staff and it was a pleasure to work with them!
And based on what we heard from the kids - they really enjoyed it! I hope we will see TED speakers growing up out these kids who were just getting acquainted with TED :) 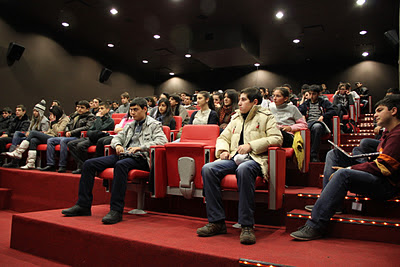 Here are a few official numbers about TEDx: 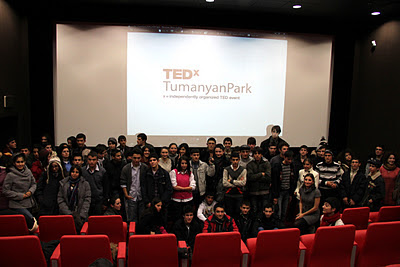 Here are more pics from the event, made by my lovely cousin Semira Martirosyan.

P.S. My status msg on FB about becoming a TEDx organizer got 120 likes and 30 comments. As it turns out, there were rumors in the city that I had quit my current job and now I'm a full-time TEDx organizer :). Dear all, i'm still PanARMENIAN Arpik and I have no intention to change my job. Being a TEDx organizer does not require full time efforts, thankfully :)