I typed "y"... I am now suddenly, geekily and happily engaged :)

The rumor spreads and everyone keeps asking - how was it? what did he say? Since it was very unexpected, geeky and with so many details, I thought it would be best to write down here and share my happiness with the world.

It was an ordinary Wednesday (November 7). The only 2 things that could be counted as "not ordinary" were the facts that a) I was sick and bedridden on Monday and Tuesday and b) my (now) fiancé was on a business trip in Stepanakert, Artsakh (or so I thought).

On Tuesday evening, while tracking his journey on latitude, I asked him to call and wake me up on Wednesday morning and so he did. I promised I'd get up soon. But since my tummy was till aching, I decided to cuddle in bed a few more minutes and eventually fell asleep again. I woke up a couple hours later to find his messages like "Asleep again?". I started to slowly dress up and get ready to go to work. My friend Lia called to ask me if I was still at home and could take the pocket books I had promised to pass to her. It was around 1pm already. Then it turned out I had to buy my dad's newspapers. So I went out, bought the papers, brought them home and headed to work. (see the bullet points below the post to find out why I described these details)

On my way to work, next to the Charents monument pathway, a teenage boy handed me something. I asked "what's this?", in order to avoid the religious pictures that kids give on streets and ask for money. The boy eagerly replied - "vizitka!" (business card). I took it and saw a nicely designed business card (pictured below).
I went on a few more steps and checked the QR code on a side of the card, which read "Will". "Hm.. Interesting", I thought and entered my office.
I told about the card to Azar, my boss. My guess was, that this is some promotion or maybe a puzzle, a quest..

In about half an hour I am being tagged on a picture on Facebook. It was in a closed group of AIESEC alumni. See below: 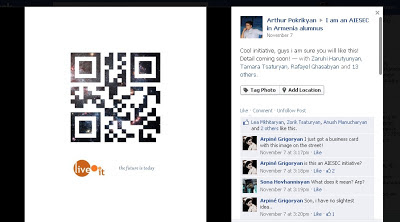 I was tagged together with a bunch of other people.. It had the same logo as on the business card.. and a QR code reading "You". The description was "Cool initiative, guys i am sure you will like this! Detail coming soon!". I started to suspect that it had something to do with AIESEC - some kind of a new project and I was lucky to get the card on the street! The comments on the post didn't shed any light to what it was.

At 6pm I had an appointment with Kristine, Gohar and Lia (TEDxYerevan organizing team) at The Green Bean Coffeeshop. Kristine had written us a week ago asking to get prepared for a dinner with the US Ambassador John Heffern (who attended TEDxYerevan 2012). We had to discuss our possible cooperation. Kristine asked us to dress nicely, no jeans or suits -- just a cute dress. She also asked me to bring my netbook, since we had to discuss things in Green Bean, before going for the dinner. I didn't suspect anything yet :D
I got there and we started to discuss our stuff. The waiter approached, and I ordered a bagel and no drink. Gohar ordered tea and Kristine insisted that they bring another cup for me to drink too, since i was recovering from cold. I got the Green Bean mug... and it had the "liveit" logo and again a QR code! 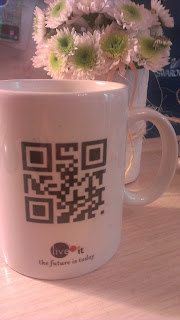 I got surprised and started telling them about the card and the picture from facebook... and then finally got to scan the code. Guess what? It read "Marry me?" ..... I blushed and smiled... and then immediately got a call from Azar (my boss), who told me that supposedly panarmenian.net was hacked and I should check it quickly and call him back, since he was outside, far from a computer. I turned on my netbook and opened panarmenian.net. I got this console screen instead (click to view bigger):

The waiter, in a white elephant t-shirt, was looking at me and smiling. She led me to the other hall of the cafe to find my Areg. With white lilies and a ring. On his knees.

We were surrounded by friends - who were involved in all this - cheering, applauding ... By that time i was blushing with my full capacity :).. shocked to find Areg to be in Yerevan and to have a ring on my finger...

The story didn't end here.
We sat at a big table with this company and everyone was telling details of the "QRաջարկություն" operation.. Something that was being planned around me for the past few weeks.

It turned out that: 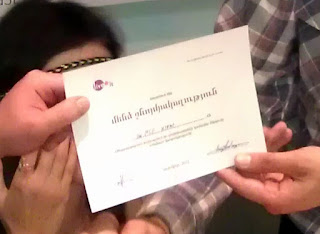 So.. this is the story :) I want to thank all of my friends (and the Green Bean staff) who were involved in the organization of this beautiful day.. it's really something that me and Areg will remember forever :) 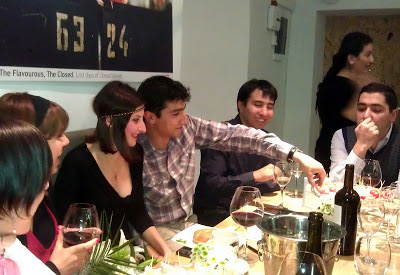 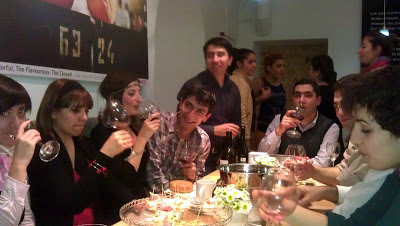