The New Year celebration is one of the most anticipated holidays for an Armenian family.
Through the years, the traditions and customs are being kept but also a bit modernized :) Some of the customs come from Soviet times, they are quite similar to the ones in Russia and former USSR, but some are typical only in Armenia. Families with modest means and low income do their best to save money for New Year table. People even do more than they can afford, since it's believed that "You'll spend the year just the way you've welcomed it" and also people will be welcoming guests the following days, so the table has to be as "rich" as possible.
The preparations start weeks before the New Year. People start attacking the food stores and supermarkets, trying to do the shopping beforehand, since the last days many things become more expensive (others like to leave everything till the last moment and the shop owners are earning on it).

The Table
One of the most anticipated New Year table "accessories" is the pork leg. It has become one of the main symbols of the holiday and there are already many jokes connected to that "cult" - like the question "how days in advance do you buy the pork?" asked to everybody or the greeting "happy pork holidays!". It costs about 100$ for an 8-10 kg piece. The recent years, some families that are trying to be original, are replacing the pork with turkey or some fish. In my family, we never betray this tradition since for my father, the pork is a "must-have" and traditionally my mother cooks it the best way. So the pork in our home is something to try out at the new year ;) 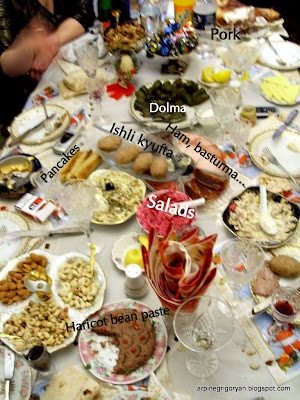 a typical table at new year - my uncle's house example
Other traditional things for the table are meat snacks (ham, basturma, sujukh), various salads ("stolichnyj", "olivier", chicken breast with nuts or mushrooms and other), … 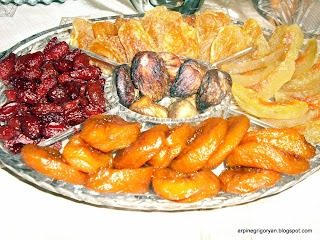 Dried fruits on our table

on the left - Հոն (couldn't find its name in English and even in Russian for translating), apricots on top, peaches on bottom and watermelon slices on the right, figs in the middle. 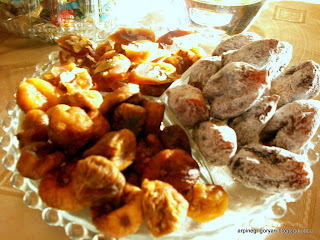 Sudjukh on the top, sweet dried figs on the left and dried prunes
For the bread we usually put Armenian thin lavash since it lasts longer fresh. For about a week we don't do any shopping (actually we wouldn't be able to do it since the stores are closed), so all that days we are eating the food prepared in advance. Many people's stomachs won't easily survive this holiday. 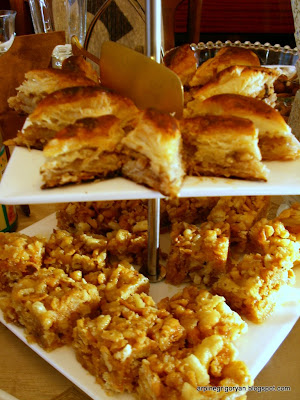 my favorite eastern pastry on our table
it's Pakhlava on the top (eastern pastry with walnut stuffing and honey) and "rshta halva" on the bottom (again with walnuts and honey)
There's an unannounced competition among the families and housewives - whose table will be richer and more original?. In addition to the traditional dishes, my mother also makes "chicken Kiev" cutlets, and traditional "Ishli kyufta" - chopped meat of different kind - stuffed one in another. Usually meat-stuffed pancakes are also an important part of the new year table, as well as traditional Armenian Dolma made by grape leaves.
No female family member can skip from the responsibility of making these preparations (cutting vegetables, rolling dolmas, and baking pankaces).

The House
The preparations are not only for the table, but also for the house. A very important tradition for Armenians is cleaning out the house. These days girls are going upstairs on the stairs cleaning chandeliers and ceilings, also tops of wardrobes, cupboards and other wall units. This tradition is believed to be very important so that the house have to be totally ready to enter the new year clean. If you call an Armenian house on the last days of December, be sure that if you ask what are they doing, they must be either cleaning, or cooking :)

So the new year is traditionally being met with the family. In some families women are busy preparing the table and cleaning the house up to the last minutes of the year. Then we are watching the Catholicos' and President's speeches, watching the Republic Square clock ticking. With the ticking, we raise glasses, say toasts, wishes and start eating :) pork, salads etc...

Later some close relatives may arrive. Some families meet the new year also with the Moscow time (1 hour later), since Russian TV channels are very popular in Armenia and we watch also Russian president's speeches, compare them with ours' :D

Then the fuss with phone calls begins. You have to be very lucky to be able to make a call or have your sms delivered. The telephone operators have the most extensive traffic load this night. It's also funny getting sms from unknown numbers with standard phrases "happy new year, i wish you happiness".
Also, during all the holiday days, with all congratulations and wishes that one is saying to another, one very meaningless and stupid question is being asked always ! It's "How did you spend the New Year?". Of course, it's not about spending upcoming the year, but about the holiday, and you should really do something notable to tell since that question is just un-skippable.

For the recent years it has become a tradition to meet the new year in Tsakhkadzor (a small town that became a winter resort, about 30 mins from Yerevan). All the guest houses and hotels are already fully booked before October! Most of the venues have their new year eve celebration show mandatory to attend and included in the price. It's nice when families can arrange to rent a house with their friends families and spend a week in this popular winter resort, enjoying the snow, skiing and climbing the mountains with the ropeway.

Some families go to the restaurants for the night, where the Armenian pop stars start visiting the whole night. It's their most packed season :)

New Year eve's TV shows of Armenian channels become more and more professional each year and you can notice that their budgets also increase by each year. But still if you switch the channels that night, you'll see the same pop stars singing the same hits :( The most popular shows are humorous films and recordings from previous year's humorous films.

Guest/Host or "tun-tunik"
The next day the holiday routine begins… endless visits and guest welcoming. It lasts from January 1 till 7-8. Families start visiting each other, one after another. In a day on average 3-4 visits are being completed, some people manage to visit more! It's kind of annoying but you may visit the families that visited you, just the next day. I wonder, are there so many things to talk and discuss ? :) On each visit, everybody has to try all the dishes that the hosts have prepared, even if it's your 5th ishli qyufta or pork ham slice. They will insist badly and you won't resist :D 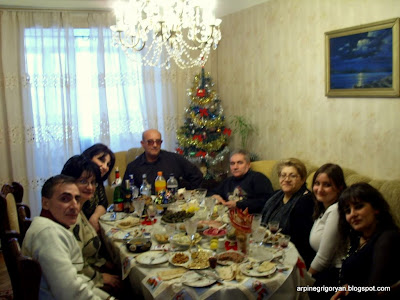 a family visit :) at my uncle's
There's some kind of a priority system for the visits - the first two days are mainly for the close relatives and on Jan.1 it is required to visit houses where somebody has died that year.

Armenian Christmas
Armenian Christmas is being celebrated on Jan. 6. On the eve, people usually go to the church and bring consecrated fire from there (lighted candle that will clean the house from dark spirits). On the Christmas day families gather to eat rice prepared with dried fruits or raisins, eat fish and drink wine. No meat is allowed. Then some people visit a church and light a candle again.
The next day of the main church holidays (including Christmas) is called "merelots" and that day people visit the graves of their relatives. From 2008, all the "merelots" days are declared non-working and are replaced by the nearest Saturdays in the week.

In Armenia the Christmas is not as much anticipated and celebrated as the new year's eve, but i guess it depends on the family traditions.
Posted at 12:21 AM