I woke up and saw a clear blue sky, with no single cloud on it. Everything was white outside and the bright reflections were blinding if watched longer.
I couldn't miss the opportunity to go out and walk a bit in the city, especially when it's a festive mood everywhere around. 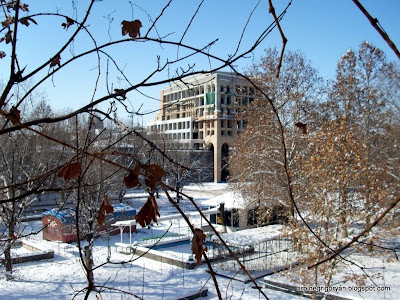 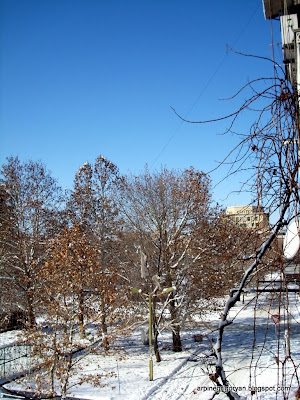 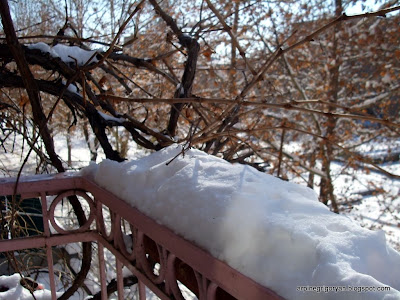 So I went out and it was chilly but sunny and no wind. -5 C outside officially, +7 shown by our thermometer under the sun :) Some streets (like mine) were still in a thick layer of snow (with a thick layer of ice under it), only the major ones and avenues were partly cleaned (by the traffic I guess). 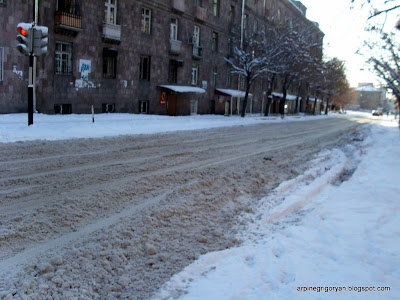 Cars had difficulties trying to get out of the yards and only ones like jeep or Niva are able to get out of the thick layer of snow and are able to drive on the layer of ice… Yesterday we could reach at my aunt's (a small neighborhood on a hill called "blur" /meaning "hill" in Armenian/) with some difficulties... the public transport is still rare and luckily we could reach there by metro + 10 mins walking. On the way we were watching the cars trying to drive in the neighborhood. If any car could go up the hill everybody were applauding and showing respects :D but most of the cars were doing useless attempts to climb the icy road on the hill.

....I was walking on the central streets and looking around. People were in groups, mostly families rushing to visit their relatives and friends, and some school or student groups. There were attractions and some fun activities organized for kids at the Republic Square. 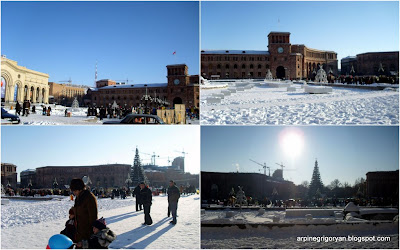 The sun was incredible. I couldn’t not to smile at it :) I was walking by myself on my favorite streets, taking my favorite routes. I was thinking about the big changes that happened to my life and about ones that are still waiting to happen. My favorite cafes were all closed. Rare stores and cafes were open. Many of them will open already tomorrow.

"Bitter sweet symphony" was brought by shuffle of my XpressMusic and I started to sing it silently and my step became similar to the Richard Ashcroft's walk in the video for the great song :)

I saw champagne bottles lying on the snow with some plastic cups near, I saw icicles melting, dangerously hang from the roofs, i saw remains of colorful balloons and decorations. 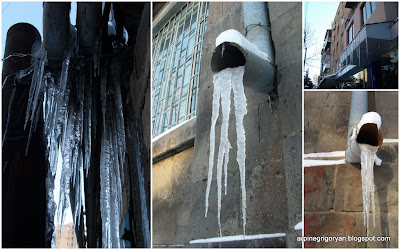 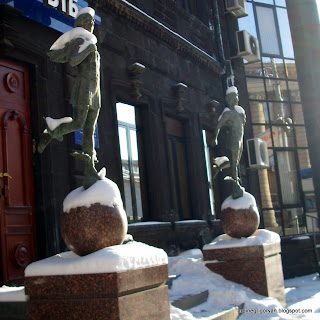