My Astronomy hobby and the International Year of Astronomy

2009 was announced to be the International Year of Astronomy. 400 years ago Galileo Galilei was the first to use telescope for observing the sky.


In 1609, Galileo Galilei first turned one of his telescopes to the night sky and made astounding discoveries that changed mankind’s understanding of our position in the Universe: mountains and craters on the Moon, a plethora of stars invisible to the naked eye and moons around Jupiter. In the same year, Johannes Kepler published his work Astronomia nova – in which he described the fundamental laws of planetary motions. - Wikipedia

Space Expo and the diploma
I am a big astronomy fan since childhood. It started in February 1994, when I was in The Netherlands and was taken to the Noordwijk Space Expo.
It made a huge impression on me and after that I began watching the night sky with different eyes. I have an "Astronaut's diploma" from that space expo that is hanging on my wall for the recent years and sometimes when I watch it, it makes me think "Gosh, I have an Astronaut's diploma!!!!" :D 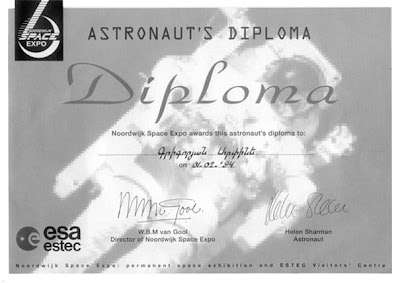 I was so much passionate about astronomy, reading and watching documentaries a lot, that one day at school i announced that i am going be the first woman on Mars :) Classmates laughed at first, then some of them asked for my autograph for future ;) 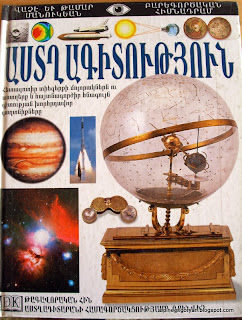 One day when I was 14, walking in Vernissage (flea market in Yerevan) with my mother, I saw a wonderful book on astronomy in Armenian. It was among some old books from old home libraries that people usually sell in Vernissage. It costed 2000 dram and my mother bought it for me without any hesitation. It was my first and best astronomy book ever. It was brand new and even published in the same year ! I haven't had any book of that quality before. Called "ASTRONOMY" from the "eyewitness guide" series, it turned to be an Armenian translation of the Dorling Kindersly edition. It was hard covered, high-quality publishing on a glossy paper with colorful illustrations that was published in Armenian with the help of Vatche & Tamar Manookian charitable fund. Taking into account the quality of books we were studying with at schools that years, this book was more than wonderful. It helped me not only to satisfy my curiosity, it meant a lot ! I felt it as it was sent to me from above. 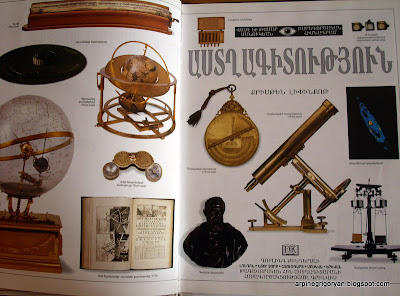 That time and many years later I was carrying that book whenever i was going out of the city overnight, to watch the sky and tell my friends about the constellations and some interesting astronomy facts. 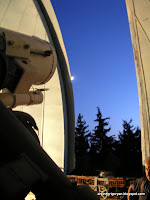 I was always using the occasion to visit the famous Byurakan observatory. We were watching the Moon, Jupiter rings, Mars and some stars with the 3m telescope and asking questions to the astronomer that was guiding the excursion. I liked to ask more advanced questions to make them ask me if i wanted to work there :D But they never asked me :( 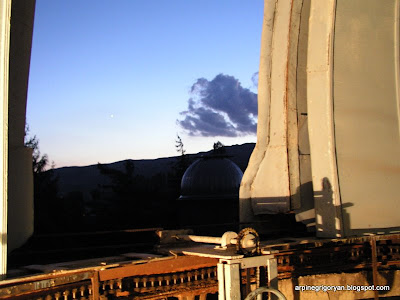 I don't know what events are planned to be organized in Armenia this year but I'll try to participate and restore and renew my hobby.

And I will try to find this film: http://www.eyesontheskies.org/
About the film and download links in Russian.
Website dedicated to the IYA2009

Greetings to my astronomer friends ;)
Posted at 5:00 PM

Email ThisBlogThis!Share to TwitterShare to FacebookShare to Pinterest
Labels: bzik, me, memories