Boost your brain this summer: Coursera, edX, TED-Ed and other online learning resources

I declared my summer 2012 as a summer of learning. I love learning new things by myself and I have already reflected on the topic of self education here a two and a half year ago. There I listed several resources that are generally still actual, however some new great opportunities have emerged for self-learners. MIT OCW, for example, seemed to be one of the greatest things, however, when digging into it, you might get just partial information (just lecture notes, just assignments, etc). I was more looking forward to a real online class, with video lectures, assignments, deadlines etc.

Google Education resources
Earlier this month I learned about an online course of power searching offered by Google. I signed up for it partly because of I was interested to learn the methods and media used in the course, then surely also to learn new things on search. They were 6 classes, each comprised of lessons (video lectures) and activities (quizzes). There was a mid-term assignment with a deadline and a final assignment. One could attempt to take them as many times as needed and just the highest score was being counted. The certificates were being sent out to those who got at least 75% score. I got 100% :) Now the classes are online for everyone, without the assessments, however. 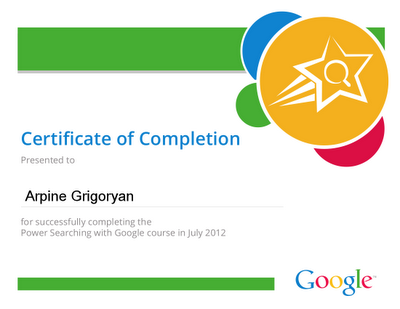 Hopefully, more courses like this will be offered by Google!

I had heard of Coursera since months ago, however signed up for it just recently, after I watched its co-founder Daphne Koller talk at TEDGlobal 2012 (the talk is not yet up on TED.com, I watched the webstream, upd. 03.08.2012 - the talk is now live!). There were several interesting courses starting in September, January 2013 and even later. The first course I signed up to, started on July 23 - "Internet History, Technology, Security".
It features video lectures every week, quiz assignments and peer-graded assignments. The platform has a basic wiki for additional resources and also a discussion board, where students discuss various topics (except for the quiz answers :) and even form study groups (there is one for Armenians as well).
I really love the coursera platform and look forward to completing several courses there! 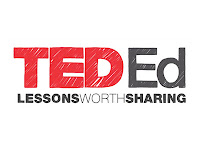 This is TED's educational initiative, was presented at TEDxSummit in Doha, and launched in spring. It features animated videos on various topic that can be used in classes.
Here is one of the most recent lessons: "How do pain relievers work?"

Here is one of my favorites: The cockroach beatbox

First it was MITx, now it's edX - ambitiously announced as the future of online education. It's MIT and Harvard that teamed up to create online courses for interactive studies on the web, free for everyone.


EdX's goals combine the desire to reach out to students of all ages, means, and nations, and to deliver these teachings from a faculty who reflect the diversity of its audience. EdX is based in Cambridge, Massachusetts and is governed by MIT and Harvard.

Few days ago edX announced its 7 courses for Fall 2012 on Computer science and Chemistry from MIT, Harvard and Berkeley. Currently I'm looking forward to new courses that would be of my interest.