a taste of military 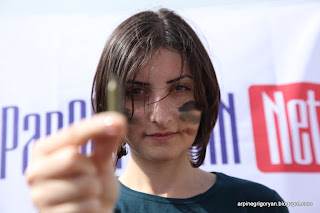 One sunny October afternoon PanARMENIAN Media staff took a day off (the news editorial works 7-days/week) and went on a team retreat to a... military polygon. Being a pacifist and all that stuff, I had announced that I won't be taking a gun, and would just stand there and watch other people shooting (I had even missed a preliminary training on how to load the gun, how do hold it, what/where are the targets, etc)

The only required thing was not to wear skirts (please:). I gladly put on my black patent boots and jeans, someone arranged a special rambo-style make-up so we arrived there, at the Nubarashen military polygon (in a Yerevan suburb) fully prepared.

We got the full cartridge and signed in a special list. There were some military servants standing nearby, enjoying this scene with the mostly female group that was laughing, making fun of each other and holding a real kalashnikov for the first time in their lives. Then they were cheering us and giving advices on how to hold it so it wouldn't hurt the shoulder and to open the mouth not to hurt the ears. 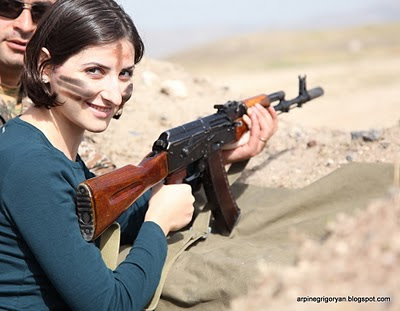 Turned out I was the 2nd one in the list and as I usually do in these kind of situations, i did the opposite of getting into panic. Meaning, I got concentrated and really up to doing it. I just love new experiences in life.
I took the gun, asked the instructor to make sure it won't hurt my shoulder and barely seeing the target I started to push the trigger.. one, two... three.. not even close :) then I got the round. puf, puf!
To me the target was to overcome myself, not to hit a physical object. Yeah, it was deafening, my untrained shoulders felt the kickback and i smelled the gunpowder to the extent of getting used to it.

Overall, this was a remarkable experience and I got a souvenir in the form of a cartridge case to remind me of my first gun experience in life.
P.S. Foreseeing questions like how did we organize this kind of a team retreat, I must say that the idea belonged to our editor-in-chief Marina, who wrote an official letter to the Minister of Defense and got the approval. All the security measures have been taken in the polygon and special preparations were done in order to host us that day.
Posted at 2:16 AM