Fight Club. my feelings about the book, quotes and some kinetic typography 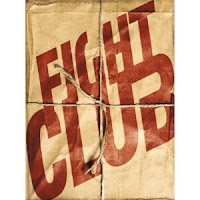 While I was reviewing my 2010, I happily concluded that the Kindle was one of my best acquisitions of the year. Thanks to it, I read so many books, I wouldn't normally read due to my stirring life. However with some geeky touch - it became possible!

One of the most notable books I've read during summer was the "Fight Club" by Chuck Palahniuk. It was an awesome read.

Actually, I've been hesitating whether I should confess this embarrassing fact, but to be fair I will. I hadn't seen the movie... till last month. But I love the fact that I saw it after reading the book and that the movie was cooler than the book. Even the author Palahniuk has stated that he found the film to be an improvement on his novel.

At first, I was unsure if it was a right choice for me to read this book. I'm generally against violence and I hate watching that kind of movies, and especially reading about it. I prefer to get some positive emotions from those things I occupy myself to give my brain some rest. But the book got me thinking about lots of stuff and even affected some of my beliefs. This is a cult movie indeed. It contained a great amount of notable quotes that were carefully copied with my Kindle's "Notes" feature :) Here are my favorite ones. I'd bold almost every quote here.

"This is how it is with insomnia. Everything is so far away, a copy of a copy of a copy. The insomnia distance of everything, you can't touch anything and nothing can touch you."

I loved the part when the author was describing why they were attending the various support groups.


"I never went back to the doctor. I never chewed the valerian root. This was freedom. Losing all hope was freedom. If I didn't say anything, people in a group assumed the worst. They cried harder. I cried harder. Look up into the stars and you're gone." 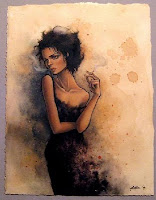 "Marla's eyes narrow. She never dreamed she could feel so 'smarvelous. She actually felt alive. Her skin was clearing up. All her life, she never saw a dead person. There was no real sense of life because she had nothing to contrast it with. Oh, but now there was dying and death and loss and grief. Weeping and shuddering, terror and remorse. Now that she knows where we're all going, Marla feels every moment of her life."

"Marla's philosophy of life, she told me, is that she can die at any moment. The tragedy of her life is that she doesn't".


"Sometimes, you wake up and have to ask where you are. What Tyler had created was the shadow of a giant hand. Only now the fingers were Nosferatu-long and the thumb was too short, but he said how at exactly four-thirty the hand was perfect. The giant shadow hand was perfect for one minute, and for one perfect minute Tyler had sat in the palm of a perfection he'd created himself. You wake up and you're nowhere. One minute was enough, Tyler said, a person had to work hard for it. A moment was the most you could ever expect from perfection. You wake up, and that's enough."

"I just don't want to die without a few scars. I say. It's nothing anymore to have a beautiful stock body. You see those cars that are completely stock cherry, right out of a dealer's showroom in 1955, I always think, what a waste." 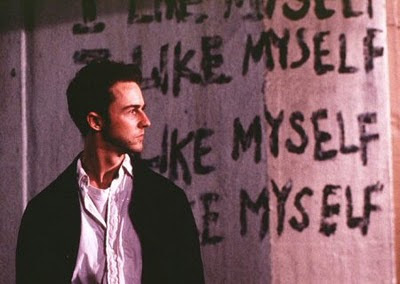 "At the time, my life just seemed too complete, and maybe we have to break everything to make something better out of ourselves."


"You are not a beautiful and unique snowflake. You are the same decaying organic matter as everyone else, and we are all a part of the same compost pile."


"Nothing was solved when the fight was over, but nothing mattered."


"I'm breaking my attachment to physical power and possessions, because only through destroying myself can I discover the greater power of my spirit".


"Its only when you've lost everything, that your free to do anything."

I was thrilled by the scene with the supermarket guy (in the book it was in a bus). Here's the big quote from the book, better to read it entirely or watch the scene from the movie see below)

"Raymond K. K. Hessel, your dinner is going to taste better than any meal you’ve ever eaten, and tomorrow will be the most beautiful day of your entire life."

Here is the actual movie scene in Italian, in case ))

My sweetheart Jared Leto has a small role as "Angel Face". His character gets terribly beaten by the "Narrator" and the following line just made me think. A lot.

Here are some wonderful animations - kinetic typography videos made with some epic moments from the Fight Club.

“Man, I see in fight club the strongest and smartest men who’ve ever lived. I see all this potential, and I see squandering. God damn it, an entire generation pumping gas, waiting tables; slaves with white collars. Advertising has us chasing cars and clothes, working jobs we hate so we can buy shit we don’t need. We’re the middle children of history, man. No purpose or place. We have no Great War. No Great Depression. Our Great War’s a spiritual war… our Great Depression is our lives. We’ve all been raised on television to believe that one day we’d all be millionaires, and movie gods, and rock stars. But we won’t. And we’re slowly learning that fact. And we’re very, very pissed off.” — Tyler Durden

Yeah, and I have to mention that I'm now pretty terrified after realizing how restaurant waiters can mess with the food :(

in case you want more quotes. Here's a fair collection on wikiquotes.
Posted at 2:04 AM

My favorite quotes are

and this one which I sometimes use

"Now the question of etiquette, as I pass, do I give you a ass or the crotch"

Just found your blog while googling for images from Fight Club, and decided to follow you ( :

I like some of the quotes you shared, "If you don't know what you want, you end up with a lot you don't"
"Its only when you've lost everything, that your free to do anything" sounds like L Dicaprio in Titanic, haha

Fight Club likewise affected me in a powerful way back in the day, the movie I prefer over the book.
I just posted my own review today, should you be curious?