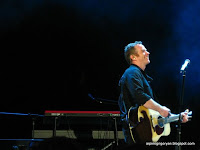 I got invited to Garou's concert on March 22. It was organized in the framework of the "Journées de la francophonie" by some "Black Ban Productions" company i've never heard of before. It was supported by the Government of RA, some ministries and the French Embassy in Armenia.
The tickets were quite expensive (10 000 - 70 000 AMD) and i wasn't even planning to go there until i got invited :) My mom, a big Garou fan, was asking me to find cheap tickets for a long time already, but i couldn't do anything. At last, she bought tickets on the last day with a sale !!! 30 000 AMD tickets costed 10 000. I can imagine thoughts and feelings of people who bought earlier with unreasonable prices while discovering the last day "discounts".

So some people payed about 100$ for this piece of paper, and yet this was not the most expensive one.
The concert took place in the big hall of the Sport & Concert complex (where the ice skating-rink is). Many people like my mom were quite disappointed to discover that it will be in the big hall instead of the small one, since the sound could be not satisfactory and it could be cold in that big hall. Despite of the ticket prices, we noticed some hard traffic on the way to the SCC and the huge crowd downstairs and the difficulty of parking in the parking slots of complex. The places in front of the stage were the cheapest since there were no seats and were mostly for youth, for jumping and dancing :) Garou invited the public downstairs "to rock" several times, but i bet people who paid tens of thousands for their seats weren't be so eager to join the crowd in front of the stage :) 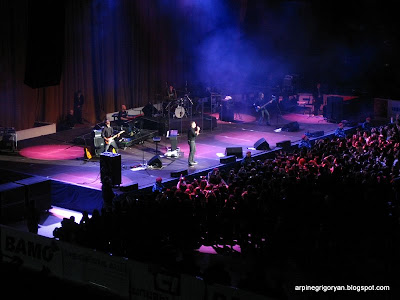 I wasn't very much familiar with Garou's music. I didn't listen to anything besides Belle, Gitan and the French album "Seul". I was pleasantly surprised to discover his English songs and the album "Piece of My Soul". I was mostly impressed by the performance of the song "You and I" on a piano. At first i thought that it's again a cover for some famous song that i should likely know. I liked it so much that listened the entire song with closed eyes. Then I typed some of the heard lyrics on my phone notes to find it later :) Now i found that song and can't get enough of it !!!
On last.fm Garou has got only 447.854 plays (it's really not much comparing to other similar artists). He's way too much underrated! I'll slightly increase that number on the following weeks though ;). 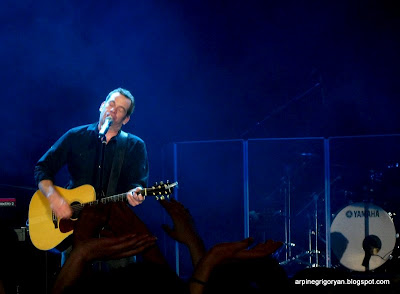 Since the audience wasn't very familiar with most of his songs, he made a clever decision to sing covers of other famous French songs. He was actually asking the audience about the french songs we know. He performed "La Mer" (Charles Trenet) and "Beyond the Sea" (Bobby Darin) mixed, also "La Boheme" of Charles Aznavour (piano solo), Celine Dion's "Sous le vent" and some others. 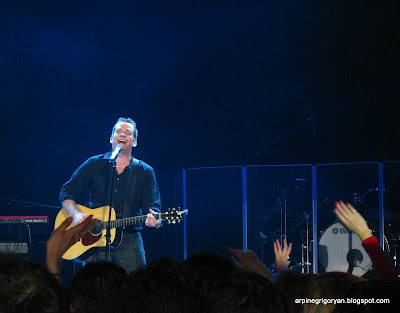 The public was much surprised hearing the beat and chords of "Come together" (of The Beatles) that was smoothly transitioned to "Belle".
Since the "Notre Dame de Paris" fever in Armenia, Garou became famous here and had been claimed to have some Armenian roots. As it usually happens, rumors have it that many of worldwide celebrities' have relations sounding like "grandmother's cousin's son's wife's neighboor was Armenian". He neither confirmed nor denied the fact of him having an Armenian ancestry (also during the press conferences), but pronounced from the stage  "Armenians, we are cousins". 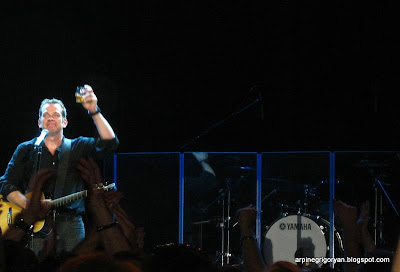 He asked for an Armenian brandy/cognac right on the stage and was given it on the next break :) He kept giving compliments on how kind and hospitable our nation is and saying "genatsed Hayasdan" :)))

This was an amazing show with a truly high-quality sound and organization (not counting the ticket prices). The tickets had several types of protection from fakes, and they were being checked on the entrance by their numbers and attendees had to pass a scanner and have purses and bags checked. And Garou.. well he got some hundreds and why not thousands of new fans. He was worth to be seen on the stage.

* photos are taken by my friend Tata
Posted at 1:58 AM