"Taxi Eli Lava" film was produced by Sharm Holding. I promise to be neutral with the review despite of the fact that I've worked over 2 years in that company (i'm no more there for 1,5 years), and I'm quite familiar with the directors and crew.

The film consists of 10 7-minute episodes directed by different people and shows us their view of the Yerevan city. It's format and topic is explicitly copied from "Paris, Je T'aime", "New York, I love you" movies (I love this format also in "Coffee and Cigarettes" and "Chacun Son Cinema"). In fact, the working title of the film was - "Yerevan, I love you".

At the end of the movie I was pleased and also surprised because because i was expecing much less - something like "Mer Bak 3" (the previous Sharm produced film drowned with aggressive product placement and seeming to be a film for advertisers only).


Some of the episodes made me laugh, some - made me cry (really!) and some made me think.
It was different from other previous films also because it contained some "open" scenes not so usual for Armenian "pop" movies. 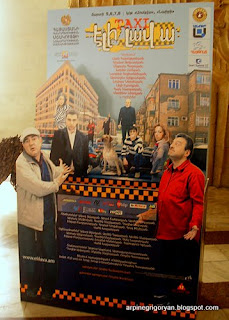 Yerevan was presented as an anthil and through eyes of a stray dog, a prostitute, an art school student, common teenagers. The thread of the story is the taxi driver occasionally meeting the heroes of episodes and expressing his thoughts and positive mood. It makes you rethink of how small is the city indeed and how everybody and every occurance is interconnected and a you'll see a small try to untangle the circumstances that brought to a particular moment in the episode "Yerevan ragtime". I like "Sheko" the most! Directed by David Babayan (who also directed "Ararat" video of Arto Tuncboyaciyan) it's showing the dog's perspective on the city in a very interesting way.

What was good: because of the episodes being short, you won't really get bored of it. There's action, there's melancholy, romance and love.
What was bad: the same faces. Yep, we are a small nation and the population of our country is even smaller and that's the excuse. We have just about dozen (or maybe twice more at most) of good (or well branded) actors and we have to see all the same faces over and over again. The same Nazeni Hovhannisyan and Hrant Tokhatyan (though i do really love his acting just that it's sometimes monotonous), Michael Poghosyan (well, i like him too) ... though some of new faces indeed appeared. The good thing of this was that most of the roles were short, so you were not really getting tired of them. 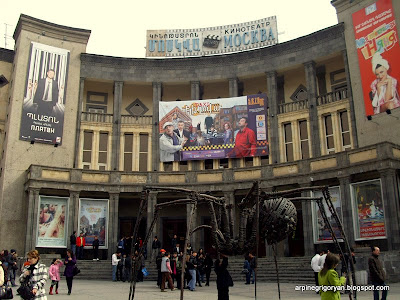 Generally, i'd say it's a new level in Armenian cinema (i guess it's also conditioned by the increasing financial resources and maybe.. experience?). So it's definitely recommended to watch.

The movie was scheduled for screening at all sessions for 4 days (March 5-8) in all 4 halls of the 2 cinemas - Moscow and Nairi (yes, in case you didn't know, in Yerevan we have just 2 working cinemas). Despite of the fact that the screenings were every hour, most of the sessions were sold out in advance (it's kinda rare for Yerevan :).

Episode titles:
Catchy theme song of the movie by Reincarnation titled "Eli lava"
(this is also a trailer to the film)

I really would like to have the title as "Yerevan, I love you"