Music is a good mean for bookmarking memories. When I come to listen to songs I was listening last year, I remember my feelings and experiences of that time. I usually attach lots of emotions and feelings to songs and everytime I hear the songs, I get them back.

One of the main sources for finding new music for me (apart from the popular ones), were the movies and TV shows. Also the bedtimetunes online radio with download option introduced me to some great music, plus some last.fm recommendations and similar artists.

I've been listening to music on my computer with Winamp and also with my XpressMusic phone player. Having a last.fm account and scrobbling almost all the music I have listened (including from the phone), I can now present my top music charts and tell about some songs that accompanied me month by month (see below). Maybe you will discover some nice music for yourself from my list :) 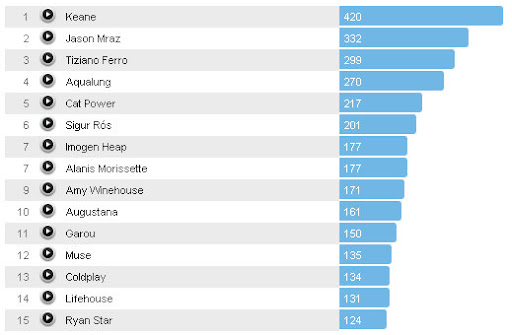 indicates that those are 'loved' songs) 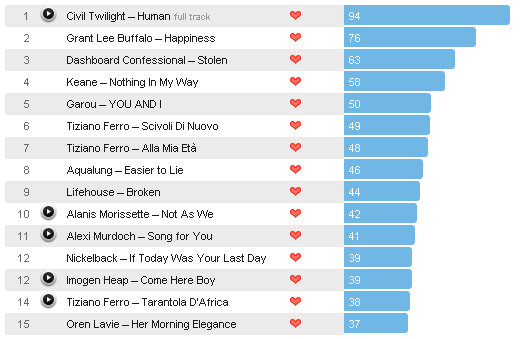 Probably the best song of my year would be «Nothing in My Way» by Keane - happy one and the melancholic one is «Human» by Civil Twilight.

January
So in January, I've been listening to Tiziano Ferro (Alla Mia Eta album) and Laura Pausini (Primavera in Anticipo). Grant Lee Buffalo – Happiness became one of my top songs for 2009. I discovered it in House M.D. series. I loved to listen to James Blunt – Carry You Home.

February
In February I discovered Ryan Star thanks to "Lie to Me" TV show. The song «Brand New Day» was great (the opening title song) and also I loved «Last train home» and «We might fall», also his «No other love» cover. Also I started to listen much of Amy Winehouse again. «Tears dry on their own» and «You sent my flying» drove me crazy in February :). Among the top favorites were Civil Twilight – Human discovered thanks to House and also Alanis Morissette's Not As We. Both songs are in my top 10. Another discovery was "The Cinematic Orchestra – To build a home" with its nice video. Then the Oren Lavie video's craze begun and I loved «Her Morning Elegance» song. Also I started to listen to Kylie Minogue's Confide in me.. especially it was nice to hear walking in the streets, in my player. The next bzik song was Маме! by Павел Воля and its super mega crazy video. Notes indicate that I've been listening to Dave Matthews too :)

March
In March I managed to attend Garou's concert in Yerevan and discovered him as indeed a good artist :) the song «You and Me» live was fantastic.. I was listening to it with my eyes closed… I also loved «Nothing else matters» by him. His album (Piece of my soul) was nice to listen while working :) I rediscovered the song «Sous le vent» performed with Celine Dion. I loved especially its lyrics. I discovered Alexi Murdoch's «Song for you» and listened to some Hooverphonic – Mad About You.
In March I attended Yves Larock's party in old Tornado club and enjoyed it at most!

April
In April I've been enjoying Cat Power a lot and «Maybe Not» was the one song driving me crazy. Jason Mraz – Song for a Friend made a comeback into my top thanks to the live performance i saw on youtube. In April I went crazy for Tiziano Ferro's new album «Nessuno e' solo» and the songs «Scivoli di nuovo», «Tarantola d'Africa», «Breathe gentle». Also Augustana (especially the song "I still ain't over you") were listened a lot, Andreas Johnson with Glorious (don't really remember where I found it from). Aqualung's "Easier to Lie" from "Lie to Me" TV show was a great discovery. Also Lifehouse with "Whatever it takes", The Weepies – Living in Twilight (from House M.D. again). I saw the video Мумий Тролль – Такие девчонки and downloaded "Piter FM" Russian movie. The song drove me crazy in April :) I also listened a lot to Gianluca Grignani feat. L'Aura – Vuoi Vedere Che Ti Amo. Then the Artisti Uniti Per L'Abruzzo – Domani was released and I was back to my Italian bzik for a while. Almost all of my favorite artists were singing Domani and the video is cooool :)

May
In May I've been listening a lot to Trentemøller – Miss You and even put it into a ringtone :) Then i went crazy for a while for the Kronos Quartet's version of Sigur Ros' Flugufrelsarinn. Then I finally downloaded Coldplay's latest album and went crazy for «Death and all of his friends» song. Chuck Prophet – No Other Love was featured in the «P.S. I love you» movie and I loved it :) I discovered «Dawn Landes – Drive» from House M.D. and briefly was into Dawn Landes. Then i discovered «The Salt Wound Routine» by my favorite Thirteen Senses.. don't really remember where from :) The song is still in my player. And in May i finally discovered the song I was dying to find since I heard it first in the Media Markt of Rotterdam while buying my laptop :D It turned out to be Ruby by Kaiser Chiefs. Still can't get enough of that song :))
I also downloaded the latest album of «Placebo» and listened to some «Battle for the sun» and other earlier songs of Placebo.

June
In June i discovered Cary Brothers and the song Ride (I guess it was still from House). I listened much to Philip Glass – Opening (from some movie again) and started to go mega crazy for «Nothing in my way» by Keane. Still not getting enough of the song. It really makes me happy. I also loved the video and song «If today was your last day» by Nickelback. I listened to Regina Spektor also a lot. Her new album «Far» with «Laughing With» was great.When the JK Wedding Dance video became viral and reached me, I was among those who discovered Chris Brown's Forever as a nice song :D
After the death of the king of pop, i started listening to some of his songs that i liked in childhood (even though never was a big fan). I listened to «Who is it» and «They don't care about us», «Smooth Criminal».

July
I found Alanis Morissette's Underneath (from the latest album) and Lifehouse - Broken (from Time Traveler's Wife movie's trailer).
Then in July I loved Sigur Rós – Fljótavík. While having it in my library for a while, my colleague started heavily listening to it, and i got infected with this too :) I loved Nouvelle Vague – In a manner of speaking and listened to it in a loop.

August
In August I started to dig Aqualung's songs and loved «Pressure Suit» and «Something to believe in» (from a movie trailer again). In August I was lucky to hear Tigran Hamasyan's performance live and loved his «Love song» and «Leaving Paris». I also dug some of Jason Mraz's songs and loved «Make it Mine». I listened a lot to Imogen Heap and her new album «Canvas». Loved the song «Canvas», but the top favorite was «Come here boy». I also downloaded some of her older songs and loved the «Headlock».

September
In September I gave up and downloaded Muse's latest album and loved the “Undisclosed Desires" instantly. The entire album was remarkable and I was listening to it quite a lot. I also discovered Lady GaGa and loved «Just Dance». It made my mood for quite a while. I found hunz – Enough to make you smile – a very remarkable song. I went crazy for Stolen by Dashboard Confessional listening to it for many times on repeat. Madonna's Celebration came out then and also made my mood for a while. I loved Mattafix – Living Darfur also in September.

October
In October I downloaded Natalie Imbruglia's new album and loved the song «Lukas». I discovered Avishai Cohen thanks to Vahan. Ben Folds – Wandering was also October's discovery. Another bzik song from October was «Come Wander with Me» found thanks to a video on Youtube, I downloaded several versions. I listened to some old U2 in October and Muse. Nina Simone was also in my mood in October. I discovered Balmorrhea thanks again to Vahan.

November
In November I discovered the song «Океан Ельзи – Квiтка» and went for it crazy for a while. Another bzik song was the «Venus as a boy» by Bjork. Still can't get enough of it. Love every sound… I listened to some Tracy Chapman like «Fast Car», «For My Lover» and «Baby Can I Hold You».

December
December's bzik song was «The Bravery – Believe» found from the Gossip Girl TV show. I listened a lot to Святослав Вакарчук's album. Also some Sinatra was in my mood. Mid-December I started listening to Rihanna's Rated R album and loved the «Cold case love» and «Fire Bomb». I briefly went crazy for Jay-Z & Alicia Keys – Empire State of Mind and its video.

Milow – Ayo Technology, Linkin Park – New Divide were also among favorites this year, though I don't remember in which month I found them.
Posted at 4:51 AM

Glad you found that Hunz track. You can download nine other tracks from the album 'Thoughts That Move' free from http://hunz.bandcamp.com/