Kindle, my review of the great e-book reader

My Kindle arrived! I wrote about gadgets in a recent post.
Many of my friends have been demanding a blog post about it ASAP, but I could actually start writing after a week of playing with it.

In case you don't know, Kindle is a book reader device from Amazon. It is a thin, lightweight, electronic reading device that you can take anywhere and download your favorite book, newspaper, or magazine right into it. 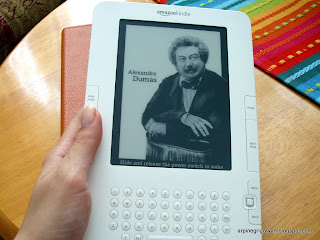 As for the technical details...


My impressions
It's the best e-reader of everything I've considered. It's certainly better than iPads as a book reader.. they are actually not comparable! My thoughts on Apple are here, and actually, i think that having multi-functional devices is not the best solution. To me, cellphone should be mostly for mobile conversations, a photocamera for photographing, e-reader for reading, PC or a good laptop for work, and netbook for browsing, working from home, writing etc... I can't find a good use for a tablet (especially iPad) so far :)

good for eyes
E-ink makes it so easy to read on... I've actually discovered that "weekend reading" thing can be real :) I've read an entire book on Kindle in just 1 weekend! And i was not just reading, but also going out occasionally :)

text-to-speech
you know, you can make Kindle to read for you :)) Just plug the headphones and enjoy a male or female voice reading for you :)))) (you can choose also slower and faster speech)

music
you can put some music into the respective folder in Kindle and it can be played during reading. some instrumental music would be good to focus on reading and isolate from the ambient noise.

easy to transfer
when plugging the USB cable, the computer instantly recognizes a new device as a removable memory. there are folders for documents, audiobooks and music. just drag and drop the files.. no software needed for transfers.

cool features
Kindle has a Built-in Dictionary with Instant Lookup. In text format documents you can put the pointer to a word, and its definition will be instantly shown from the Oxford dictionary. Very useful! Also, it's possible to highlight quotes, make annotations on interesting parts, put bookmarks etc.. (that's what the qwerty keyboard is useful for).
Also, unlike a laptop or smartphone, Kindle never gets warm so you can comfortably read as long as you like. 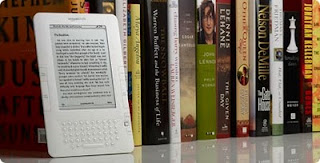 file formats
while text formats are preferred, PDF files can be easily read on Kindle too. I noticed that it's better to convert PDFs into text format (like .prc) since the fonts will be scalable on Kindle and it will be possible to highlight interesting parts in text and make notes on it.

file converting
turns out the old good Mobipocket reader (the only e-reader app that worked on my symbian phone) has been acquired by Amazon and it converts PDFs to a favorable format.

screen
it's not touch screen. But the coolest is: Read in Sunlight with No Glare. Kindle's screen reflects light like ordinary paper and uses no backlighting, eliminating the glare associated with other electronic displays. As a result, Kindle can be read as easily in bright sunlight as in your living room.
The screen has a sharp display with 16 shades of gray and is very unusual for someone not familiar with electronic ink technology. At first i had to persuade someone that it's not a sticker on the screen i didn't scratch, but the screen itself :D

interface
The device has a 5-way controller (joystick) enables precise on-screen navigation for selecting text to highlight or looking up words. There are buttons for Menu, Home, Back, Next page and Previous page.

sleep mode
after 5 minutes of inactivity the device goes to the sleep mode thus saving the energy. the sleep mode is a nice graphic pic usually with some great author depicted or a page from an ancient book. After digging in some forums i found a way to put custom screensavers :)

charging
it fully charges in 4 hours with its USB 2.0 cable, however it has also a power adapter included that can be connected via USB port.

audiobooks
it's possible to download audiobooks from Audible.com (in its format) and listen them on Kindle, bookmarking in some parts, like in text.

books and other content
of course Amazon's benefit in Kindles is not just from selling the devices itself, but the books which are now available widely for the Kindle format and special price. On their website it's announced that The New York Times Bestsellers are only $9.99 in Kindle format. Some content is licensed for credit cards with billing address in the US only. This concerns all magazine and blog subscriptions (it wouldn't work here anyways, due to our non-inclusion in the Kindle global wireless / 'whispernet' service)

how to buy Kindle in Armenia
As you could guess, Kindle is not available in any tech store in Armenia (unlike iPads which are wide spread here now). The only way is to order it online on Amazon.com itself. The website is promising to deliver it here:

However, I'd highly suggest to do the traditional Armenian way of shipping stuff from the US -- finding someone coming from US to Armenia to actually bring it with him. It ships within 5-7 days in US for free.. faster shipping can be available at some cost, however if you haven't yet got the Amazon Prime account, you can get a 1-month trial for free and get things delivered faster, for free :) (if you forget to uncheck a certain button there before the trial expires, it will, however, charge you some $70 for the Prime account).

collections
when i first turned on my Kindle, charged it and put some test files on it, i didn't find a way to sort books by types or other criteria. In the manual it kept saying about some collections and ease of ordering. I dug the internets and found out that the collections and some other features are available in the new software update that was out just couple of weeks ago :)

what's bad?
Ok, i know that you see that I'm quite happy with it, but there must be something that would make it not perfect :D one thing i would state is that the page flipping is a bit slow, however it's not annoying and easy to get used to.
another thing is that it doesn't support unicode... but! you can make PDF files with Russian/Armenian texts, in appropriate format and still read it on Kindle. Still, copying quotes and making annotations won't be possible if it's not a text file.

other Kindles?
Kindle was first launched in Nov. 2007 it was the 1st generation device and had a slightly different design from the current Kindles (launched Feb 2009).
In June 2009 Amazon released a bigger Kindle DX (close to A4 format) and in June 2010 Kindle DX Graphite (roughly black version and with 50% more contrast display).

It's rumored that Amazon will release a new, thinner Kindle in August 2010.
covers

I was recommended by a Kindle owner (privet, Gaspar! ;) to buy a leather case unless i want to have the back of the device worn out.
So i ordered original Kindle's leather cover (orange) which was about $35, and, in reality, was kinda desaturated orange...
But what was most depressing... after few days of my purchase, it turned out that my favorite Moleskine has released a special Kindle cover with a small notebook in it! ;(

why Amazon rules
The next day I bought my Kindle and its cover and it was shipped, i am opening my Google reader just to read that... Amazon has reduced the price for the Kindle (from $259 to $189) to compete with other e-book readers (the day before that, practically, hours after i purchased it). And it's $70 difference!
I'm shocked, devastated.. accepting sympathy notes... writing a status on FB about how ugly Amazon is... and BAM! the power of social media comes for help :) actually it was a good friend of mine - Susan Meschian who gave a hint that Amazon should have some refund policy for these cases... I dug in help and FAQs, but didn't find a relevant info.. then i wrote to their customer service... (their reply could come in 12 hours) but i didn't resist and called them. I didn't have to explain much :) they said i'd be refunded $70 in 2 business days :) and I was!!! I also got the same reply to my email. So i'm just a happy Amazon and Kindle customer :) 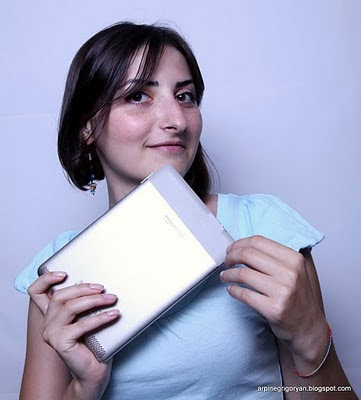 Email ThisBlogThis!Share to TwitterShare to FacebookShare to Pinterest
Labels: geeky, image, IT, review

now, i want my Kindle too!!!
really informative article, thanks! ;)

I have to say, you are a 'Titiz' Arpin jan - but this was really a great review!

IMHO too expensive for something that does only 1% of what iPad does and does in in B&W. They dropped the price for about 50% when iPad came around yet I think its WAY overpriced.

soo... finaly you got it!!! shnorhavor - myus bzikd vorn a?
PS: cool review - you should send the link to Amazon admins :) it's a free add! after reading this you want to buy it :P

What's an important difference to note between the iPad and Kindle (ahem, ArmComedy!) is that the iPad screen has backlighting/glare which makes it harder to read than the ink display on the Kindle. Remember, the Kindle is more book-lovers and people who want to read a lot of text electronically. After sitting in front of a computer all day, I like giving my eyes a break and reading text on the Kindle vs. the iPad. Just my two cents :) Great review, Arpik jan!