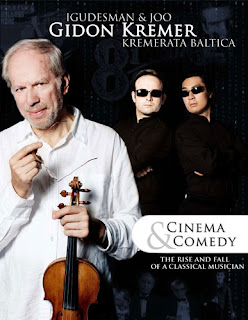 "..yet another classical music concert", i thought... I was planning to go there, turn off my mind and enjoy own thoughts conducted by the orchestra. But it turned out to be a very nice show !

"Cinema & Comedy" - show organized in the framework of the "Perspective XXI" international music festival, (that happens to be located the next door to my office room and is affiliated with my company, so we get free tickets to their concerts ;)) was subtitled "The Rise and Fall of a Classical Musician" and consisted of classical pieces combined by famous film music by Herman, Morricone, Chaplin, Rota.
Since i'm crazy for movie scores and soundtracks (by the way, my favorites - they are of Craig Armstrong, Hans Zimmer, Ennio Morricone, John Williams, Clint Mansell, Thomas Newman, Edward Shearmur, James Horner and of course Yann Tiersen and others.). ... I enjoy every piece of it in an orchestra version.

OK, to the topic. The beginning didn't promise anything extraordinary... but then the comedy started :))) the public was shocked. My mid-age neighbors were complaining that this is a mockery of the classical music and ancient values... things that shouldn't be jeered at. Even the program text was written in a funny way while most of the people thought it was just so illiterate and wrong. Like the phases in the biography - "Aleksey Igudesman was born in Leningrad at a very young age.", in Armenian it sounds funnier - "Ծնվել է շատ փոքր հասակում..." , or "Richard Hyung-ki Joo was born." - "Ռիչարդ Հյանգ Կի Ջուն ծնվել է:"...
"What a shame!" were whispering older people to each other in the audience... I was asked several times whether the authors of the text were my colleagues :/

So the reactions were contradictory, and no one was left indifferent. Some were amazed, some - shocked... musicians did their best :) The mixes like "James Bond theme" and Mozart, Piazzolla feat. "Ave Maria", the commercial break advertising Nokia tune variations sounding like Mozart, Schnittke, etc - named "Kremerata ringtone", riverdance while playing irish music performed by the orchestra, "Where's the remote control" part was so masterly, incredibly performed - these all were causing a lot of laughing, not so usual for the "Aram Khachaturyan concert hall"..

I enjoyed it fully!