What's the measure of music to you ? Do you listen to tracks or whole albums?

I've heard different points of view. Some of my friends are downloading entire albums only and refusing to copy single tracks. Well, if albums exist there might be a reason for it :D
However i still can't understand how the people who can say smth like "this song would better fit in that other album instead...". I agree that each album has something uniting the tracks, but i can't get why the song order is like that or why artists try to convince to buy albums only.

I've read somewhere that Bono of U2 was criticizing iTunes for allowing the download of single tracks from albums and not the way artist intended the it to be listened.

I personally prefer to download single tracks and listen to them, rather than have patience and listen to the tracks by their order in the album. I like shuffle mode, i like it like on the radio - when you don't know what's the next song coming... .
Though there are albums that i love as a whole, especially movie scores (for example, one of my favorites "The Holiday" movie score by Hans Zimmer)
I'm very much into the music and i listen to it most of the time of my day, but i still can't get used to albums, though i try... i guess this my habit of 'single songs' is the result of the unavailability of my preferred albums on cassettes, CDs to buy and the connection speed that made me download the songs i liked alone, not even knowing which album it is from. Also, there was a time i had a 40GB HD only, and with the lack of space, i was deleting songs i don't like and will never like, leaving my favorites only. Even now it's much more difficult to download entire albums.

I found an interesting opinion supporting the "album" listening mode:


"When you read a book, you just read some chapters? When you see a movie, you just look for a specific scene? It's not different for music, it's been intended like this."

by GravelessSouls on Last.fm forum discussions

...maybe to become a music guru, i need to get this point for albums :) 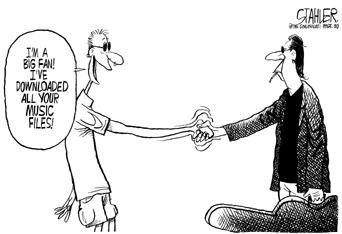 Another thing i'm picky concerning music, is the correct ID tags and filenames! Now even the artwork for the album must be on place! So in my music collection you won't find any 'unknown artists' or 'unknown tracks'.
Posted at 9:31 PM

Email ThisBlogThis!Share to TwitterShare to FacebookShare to Pinterest
Labels: i wonder, music