...and so the financial crisis reached us too. Lycos-Europe where lots of my friends have been working is being closed down. Other companies also do staff reduction, cut down budgets, decrease salaries... I've also heard that banks do not provide loans till January.

In my company, a decision has been made by the shareholders from Russia - not to sponsor the whole staff's salary for November. We were informed of it on Saturday with an announcement on the doors. It said that the company can finance the 50% of the salaries from self-financing (cutting down operational costs) which will be given on 5th, and the rest will be decided with the new executive director. It hasn't been a secret that my company doesn't bring any profit to its shareholders and something like this was expected. The point is that the guilt for this lies entirely on the management of all levels and not on the main staff who suffers from delayed salary the most. Many have loans and debts to pay. I'm also very frustrated since i won't get my salary before the trip which is quite bad. 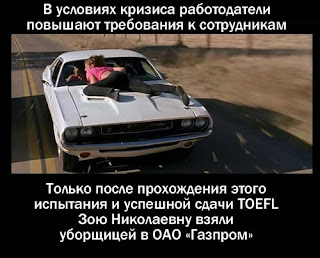 But well, there's no need to panic, as there are things a lot worse, like becoming unemployed (i'm sorry for my friends in Lycos :( ). And as my father suggests - i should take a hammer and nails and pin myself on my workplace :D

For Russian speakers: some fun on financial crisis.
Posted at 12:18 PM

Email ThisBlogThis!Share to TwitterShare to FacebookShare to Pinterest
Labels: IT, work