We won! Moreover, we defended our chempion status ! (Armenia won Gold the previous Chess Olympiad 2006 in Torino too).

photo from armenianow.com
Here's our team:
During the final round, Armenia's only win came on board four where Tigran L. Petrosyan beat Chinese Li Chao.
Thank you Tigran and others!

And here's a nice photo report from the finals. 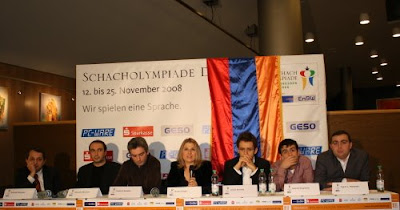 photo from the Chess Olympiad in Dresden official website
...and if you watch statistics of winners by each year in the wikipedia, you'll notice that USSR and post-soviet countries were almost in no competition for the recent decades.

For the second consecutive Olympiad, top-seed Russia failed to take a medal. From 1952 to 2004, they (and their predecessor the Soviet Union) never finished below second place.  (Guardian)
Posted at 11:17 AM