Painting day (Save the Nature), Sept. 14

on Sept. 14 the FPWC organized a nice holiday for kids - the "Painting day". 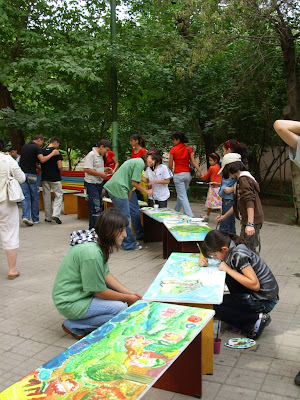 My friend was busy organizing it and i already had a lot of information about it before and wanted to have my participation.

Firstly it was decided to be on the Northern Avenue, then was moved to the so called "English park" - close to the Italian and French embassies, in front of the "Sundukyan" theatre. This park is now one of the most clean and pleasant ones in Yerevan. The grass is green, there are beautiful flowers around, benches are all accurate and nice, fountains are working. 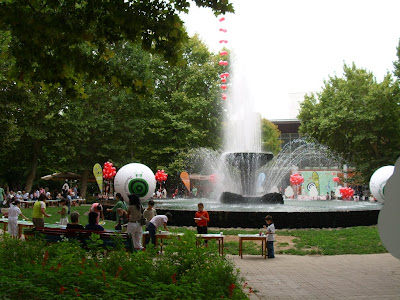 "Painting day was the big kick off event of the "Save the nature" campaign. On Sunday September 14th more than 1000 children from all over Armenia gathered in the English Garden near the Sundukyan theatre in Yerevan to paint and to have fun watching performances of circus artists, folk dancers and musicians. Children and young people painted their visions about nature on 400 tables which were arranged in lines throughout the park. The tables belong to kindergartens, orphanages and schools. In their new look they will be given back to these educational institutions thus inspiring the daily life of many children with the colours of nature." FPWC website

It was a very nice holiday for the kids from the regions, coming to Yerevan and participating in the event. There were desks from kindergardens and schools that they had to paint with ecological topics. Among volunteers i met many of my friends from AIESEC, my former students from "Manana" center.


Kids were enthusiastically doing their job while we - the volunteers were running around to ensure that they have their paints, pencils, brushes, water…
It was exhausting and thankless as from the side of the parents. They were messing around and disturbing us and own children. This was the time I realized that I won't be able to work in a kindergarden or primary school because of such parents. They are always sure that you are underrating their genious child, discriminating and not giving the same paints as to other kids. Oh yes, and they were demanding the general organizer/manager/director for complaining to him. 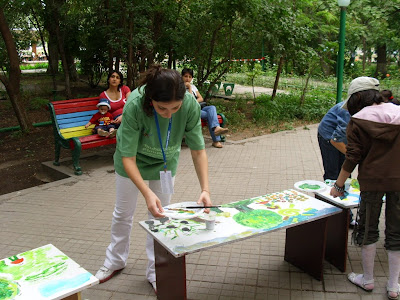 Overall i was very satisfied especially when seeing the painted tables some of which had really valuable paintings. The job wasn't useless, and i was seeing the results on the faces of kids and on the desks and whatmans. 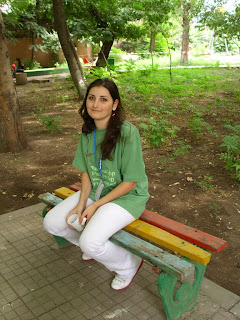 The whole event was accompanied by some nice music - live performances and Hakhverdyan's songs for kids.

More photos in the album: