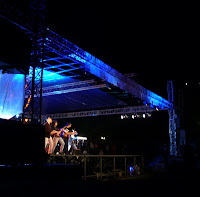 This Sunday was the coldest day in since the March maybe… It was raining starting from Saturday and it stopped close to the Sunday evening.

In Kirov park, "Rock the Borders" - an international open-air rock festival was taking place. It started with 1.5 hour delay but luckily the rain was over by that time and they could arrange the equipment… There were bands from Georgia, one from Kazakhstan, from Turkey and Italy, and of course Armenian bands like Stryfe, Dogma, Empyray etc.

I haven't been at rock concerts for a while… some 6-7 years ago I wasn't missing any :) during this one I realized how much I did grow up since then :D
Most of the attendees were teenagers - emos, goths, ppl with pierced faces, tattoos etc…  this culture is becoming more and more popular here year by year… The outstanding fact was the presence of the Turkish band "Northern Lights". Guys were rocking, really. People were welcoming and I didn't notice any display of intolerance. I was wondering if it would be the same with any other concert, especially if it was pop. Yep, even when rock fans are less social, I personally think, they are more open-minded.

To be sincere, heavy metal and metal in general is not my preferred style… I'm more into alternative, indie music, that's why I wasn't enjoying it that much...
I was looking forward to the Italian band's performance. The band with a strange name "Sadist" (my friends were joking whether there will be e.g. a French band "masochist" coming to the next festival :D) were a bit delaying with performance and I couldn't stand the cold anymore. My feet were frozen (and not only mine) and we ran to Square One for a hot tea. So I missed the Italian band's performance, though later I was told that I wouldn't like their music anyway. 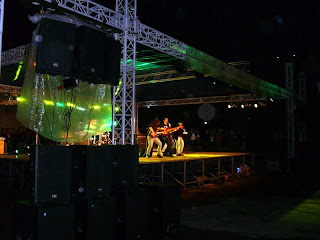 Turkish band "Northern Lights" on the stage of "Rock the Borders" rock festival
Posted at 11:37 PM

Thanks for comments ;) And also thanks for great hospitality and friendship in Armenia. We salute all rockers&friends up there !

Hey Onur! Thanks for your comment too!
You are always welcome to Armenia, and thanks again for the show :)

btw, i've been there in Istanbul and loved the city :)

it was nice to be in Yerevan, nice to meet you all, and was a great experience and a memory...

thank you for everthing.

And here is another seed that we spread for the name of friendship and rock world;